The award recognizes public managers in Iowa who exemplify the highest standards of dedication to public service and are characterized by their leadership abilities, their passion for their work, their high professional standards and the respect they are given by their peers.

She was a city clerk and finance director for ten years, first in Strawberry Point, then in Grundy Center. She also held numerous positions with the City of Marshalltown finance department including finance director.

For the last eight years she has served as an Extension Specialist with Iowa State University Extension and Outreach. She is also the director of the Municipal Professionals Institute and Academy and acts as a resource to cities through the Iowa League of Cities.

She was inducted to the Iowa League of Cities Hall of Fame in 2007 and a recipient of the 2018 Excellence in Partnership to Iowans Award from ISU Extension and Outreach. She is on the Board of Directors for the Iowa Municipal Finance Officers Association, the Board of Trustees for the Municipal Fire and Police Retirement System of Iowa and has been a contributing editor on the City Clerk/Finance Officers Handbook for more than 30 years.

She has an extensive record of service including mentoring in the Iowa League of Cities Mentor Program; instructing classes each year since 1988 at the Iowa Municipal Professionals Institute and the Municipal Professionals Academy; serving on the Curriculum Development Committee for the Iowa Municipal Finance Officers Association; hosting government representatives from Russia, Georgia and Japan through the Iowa Resource for International Service; hosting city representatives from the Czech Republic and Slovakia as part of an ISU-sponsored grant; doing regional trainings for regional city clerk groups; facilitating county affiliate certification programs; teaching City Finance 101 for elected officials and contributing to the Iowa Government Financial Initiative. 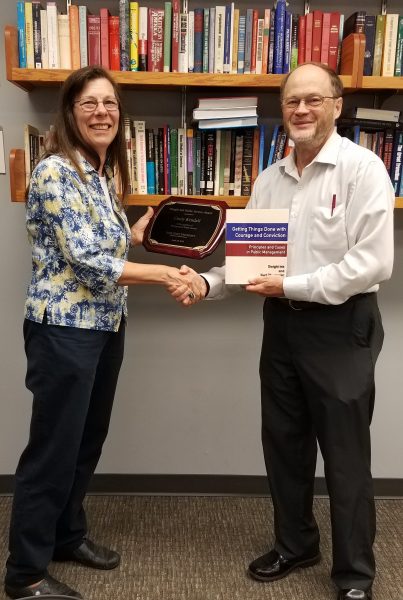